Gnomes, Svirfneblin and the family of illusionist trickster Wee Folk

Gnomes are the only demi-human race in 1e who can become illusionists.  Gnomes are remarked as being cousins of the dwarfs, but just as equally, they appear to be cousins to the illusionist-trickster races.   In fact, it appears most likely that gnomes are  actually a half-breed race, resulting from the union of the Wee Folk and the Dwarf family.

In the DMG, they are described as "lively and full of humor - often on the black side or practical jokes".
They are described as living in homes: "sometimes based upon earthen burrows, although 75% of the time it will be made in rocky hill formations" (MM), and that they "enjoy the open world of growing things almost as much as their mines and burrows" (DMG).  In short, just as we would expect someone with the instincts of both Leprecauns and Dwarfs.

In the MM, they are rumored to have "magical abilities".  This is revealed in the PH to be illusionist skill, up to seventh class level (casting 4th level spells).  These innate illusionist  powers are developed more fully in the description of the Deep Gnomes, the Svirfneblin.

Svirfneblin: 3' tall with pointy ears, home: far beneath the surface of the earth
powers (1x per day):
blindness
blur
change self
non-detection and silent movement (constant)
unlikely to be surprised (1 in 12)
immune to illusion
(20-40% magic resistance) 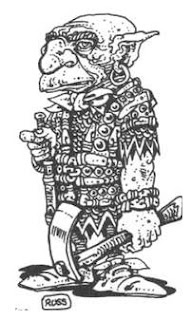 The Wee Folk have been classified according to a number of different titles, including leprechauns, brownies, pixies, sprites, and bookas.  They seem to have a number of traits in common, suggesting they form something of a family group.