D is for Duergar - A to Z Psionic Monsters 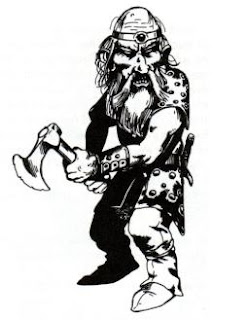 Duergar pack more punch than you would expect. Not only are they evil dwarfs, they are PSIONIC evil dwarfs! According to the book, every single last one of them is psionically endowed. That makes them quite unique in the humanoid realm, placing them on similar footing as the Gith.

They are nasty and evil in the extreme. Their HOLY MEN are dual classes ASSASSIN-CLERICS! You gotta admit, that is pretty bad ass. Of course, they love to keep slaves. They can work their way up to 9th level as fighters or assassin/clerics.

I imagine these nasty little beasties to be one of the central players in the battle for underdark supremacy, their natural psionic talent making them effective shock troops against the Mind Flayers and Aboleths, for example. It would only take small group of Duergar to overwhelm the slavers with psionic attacks alone. Those slaver races probably hate the Duergar for that reason, and so they would to organize their slave and client races to get the Duergar out of the way.

They have so many supplementary powers, they would be quite formidable opponents, not the least of which is their psionic Invisibility power. They are surprised only 1 in 10, they save vs magic at +4, and they are immune to paralysis and poison.

For illustration, let us imagine our adventurers attempt an invasion into a Duergar lair. The Duergar will be lead by a genius-level intelligence, and they are lawful, so their defenses will be well-organized.
--The 9th level leader will be able to Expand into the size and strength of a Frost Giant.
--Imagine their 9th level assassins using Reduction to drop to the size of a fly, or their psionic Invisibility (which affects the minds of up to 45 hd of enemies) to sneak up on you.
--Their 9th level assassin-clerics and fighters can cause your metal items to become blistering to the touch, to the tune of a Heat Metal spell in 2 rounds.
--Of course, they will have some nasty pet monsters guarding their lair as well.

Now, to be sure, the description actually says Molecular Attraction, but that is not a psionic power. They must have meant either Molecular Agitation, Manipulation, or Rearrangement. Given that Agitation is the only minor discipline of the three (and they only have minors otherwise), and it begins with A, I am pretty sure that is the correct one.
Posted by Justin at Monday, April 04, 2011

I've just written about Duegar in my posting on Deepearth so I particularly enjoyed this one.

Right on! They are very evocative.