I is for Intellect Devourer - A to Z psionic monsters 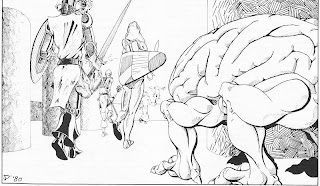 Boy this is a classic, isn't it? A giant brain on four monstrous-looking legs, it feeds upon your dying shrieks as it psionically attacks you, then takes over your body to seek more victims. Nice.

Uh, yeah, it is chaotic evil. If I am remembering correctly, Expedition to Barrier Peaks implies that it came from another world.

This is one of those cool monsters that can sense psionic or psionic-like magic being used nearby, which then launches it into "stalk mode". They can hide in shadows as a 10th level thief, meaning a 63% base chance. Combined with their ability to go ethereal, that makes them VERY effective stalkers...

This is a GREAT monster to really screw with your players, putting them into the "hunted prey" category. Imagine them being attacked with Id Insinuation or Ego Whip from this thing while it was hiding in shadows, i.e. they had no idea where the attack was coming from... Or hit-and-run tactics, as this thing tried to pick off stray members... Trying to put out any bright lights, attacking in the dark, then disappearing when the lights come back on... Yes, this monster should be used for maximum "player terrorism" effect!

I have postulated elsewhere that ALL psionic attacks should be able to affect non-psionics, and this thing's description in the 1e MM implies as much, as it will attack your mind with Id Insinuation or Ego Whip while it jumps on you and claws you. See my tables for saves vs these attacks for a helpful resource if you decide to go with this fun house rule:
http://oldschoolpsionics.blogspot.com/2010/11/psionic-attacks-upon-non-psionics-ego.html
and
http://oldschoolpsionics.blogspot.com/2010/11/psionic-attacks-on-non-psionic-id.html
Pseudo-Undead Characteristics

Many of its characteristics demonstrate that it is a pseudo-undead monster, being a living beast but drawing power from and feeding on spirit/astral energy.

Physical combat with these things would not be fun. It takes a +3 weapon to hit them, and that only causes 1 point of damage if it hits. Yikes.

Additionally, they are immune to most magic. A fireball is just a bright light to them, and lightning bolts cause only 1 hp per die.

Clearly, outside of powerword kill, your best bet is to take this down with psionic attacks.
HD: 6+6
Attacks: 4 claws (d4 x 4)
INT: Very

Etherealness (at will)
Astral travel
Telepathy
Posted by Justin at Monday, April 11, 2011