Y is for Yuan Ti - A to Z psionic monsters 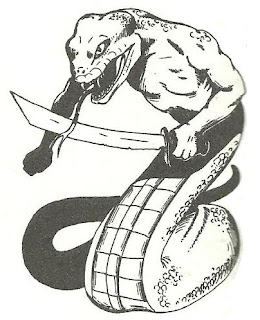 A race of evil, genius, psionic, demon-worshiping, jungle-dwelling snake-men... Win! Hard to beat that for a nice villain for fantasy high adventure.

They join the Duergar, the Su-Monsters, and the Gith in the ranks of humanoid-ish races that are entirely psionic.

Between their high hit points, their psionic powers, their magic resistance, their powerful physical attacks, and their genius INT, an adventure among the Yuan Ti would be VERY dangerous.

In the AZ Adventures campaign, the Yuan Ti homeland is slightly "off the map", down in the jungles of Mexico. Subject for a long-range adventure, perhaps. The interaction of the jungle-dwelling but good-aligned Coualt with the evil-aligned Yuan Ti would be a very interesting plot line to work out.

They are in the perfect location: close enough to be on the periphery of awareness, to provide small parties of wandering Yuan Ti in encounters in the main campaign area.

"Pureblood" Yuan Ti, those who look almost human, could also be found ranging the land, posing as ambassadors, perhaps, looking for areas of migration and conquest, while cultivating evil allies.

Keep in mind their polymorph-other power! They would polymorph their kidnap victims for easy transport, as well as for various other evil purposes.

For example, they could be posing as a traveling circus/menagerie. Of course, their menagerie would be polymorph victims!

Although the text only mentions "demon worship", it seems obvious to me that they are worshipers of Marilith (see here: http://oldschoolpsionics.blogspot.com/2011/04/m-is-for-marilith-to-z-psionic-monsters.html). No doubt, it was their worship of the demon snake lady which caused this group of former-humans to degenerate into their snake form, in exchange for their tremendous psionic and magic-resistant powers.